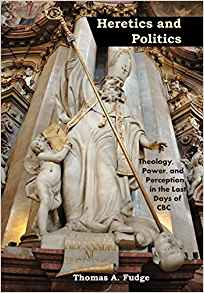 Thomas Fudge’s book, Heretics and Politics: Theology, Power, and Perception in the Last Days of CBC, was the inspiration for The Uncomfortable Confessions of a Preacher’s Kid. I doubt I ever would have had the impetus to publish if he had not gone first. They are very different books, of course, but Dr. Fudge’s review brought me to tears of gratitude. Read it on Goodreads or…

The most uncomfortable aspects of Ronna Russell’s book are threefold: It hits so close to home for so many who have experienced near-fatal suffocation by religious power brokers; it involves men and women of considerable reputation and their dirty laundry (usually kept secret); and it reveals truths too seldom named. This is a memoir of fear but also of faith and the development of a life that began as most do in innocence followed by a terrible journey from hell to hope. I am reminded of something Viktor Frankl wrote in his book Man’s Search for Meaning: “Everything can be taken from a [person] but one thing: the last of the human freedoms—to choose one’s attitude in any given set of circumstances, to choose one’s own way.” Put simply, we often cannot help what happens to us, but we can choose how to respond to it. Ronna’s response has been astonishingly brave and she encapsulates the best virtues of Frankl’s core philosophy that saved his life. The United Pentecostal Church is no better or worse than any number of other religious groups ranging from the Catholic Church to the Latter Day Saints. Claims about absolute truth, divine power in one’s life, and assertions about eternal guarantees are generally weighed in the balances and found wanting. Ronna Russell found most of her religious upbringing pious hogwash. So many of the values abortively inculcated in her were not even remotely Christian. Borrowing from Frankl again, Ronna has chosen her own attitude and her own way and in so doing has saved her own life from terminal misery.

The Uncomfortable Confessions of a Preacher’s Kid pulls no punches, takes no hostages, is intentionally iconoclastic, but speaks from the heart. It is a brutally honest narrative that will shock, provoke, anger, and inspire. The half dozen pages about explicit sex and the occasional F-bomb throughout the narrative will offend some. Get over it. That’s life. Don’t miss the core of the story. Using frail excuses to avoid reading suggests other serious issues including refusal to hear the truth about our idols. The book talks about sex in the back seat of a car and uses four-letter words… So?! UPC ministers have engaged in both before and after bellowing pulpit-pounding sermons about truth revealing that behind every legalist there is lawlessness. Touch not mine anointed, they thunder! Get serious!! This is not gloating about fallen human nature but exposing egregious hypocrisy. Ronna is a woman who spent years enduring terrible experiences as a girl lost in a spiraling search for meaning amid isolation, numbing loneliness and appalling neglect, to say nothing of insipid theology and spiritual abuse, both of which deny Christ. It is a wonder she did not become an alcoholic, drug addict, suicide, or wind up in a mental hospital. Initially I thought she deserved a medal for survival but upon reflection (reading the book a second time aloud to a friend who identified in so many ways) I reconsidered and decided that Ronna deserved all the love and acceptance she could handle for the next 40 years and that she, at long last, be recognized in her full humanity, finally free to be with the hope of becoming everything she can be. Happily for her, she did not need any holy-rolling, One-God, apostolic, tongue-talking, Holy Ghost-sanctified, water-baptized-in-Jesus-name-Pentecostals, or infantile rules about her hair and sartorial tastes to find wholeness. Thank God for travelling mercies. As St. Teresa of Avila noted almost 500 years ago: “from silly prayers and sour-faced Christians, deliver us, O Lord.” Those who knew Ronna in her early religious life need to read this book. I was among her father’s last students. He was a man I learned much good from. I still think of him as a significant and positive influence. That said, he failed his daughter (and others besides) and was, unhappily, another hero with feet of clay who, having preached to others, suffered shipwreck. These Uncomfortable Confessions of a Preacher’s Kid suggests Ronna is a better woman than her Dad was as a man.

The book caused me to reflect on how many others have walked similar pathways within the shadows of the UPC, how many have escaped terminal spiritual bondage (some by the skin of their teeth), how many have been saved (so as by fire), and (sadly) how many have been lost? Writing this book required great courage in overcoming massive adversity in order to put pen to paper, finding the strength to write the story of her life, recounting her journey from tragedy to triumph, and finding love, the strongest force in the universe. The whispers of hope from Sacré-Coeur remind us all there is a place called home. I imagine this book will help others find strength, courage and determination they never knew possible. Uncomfortable? Yes! But so what? It’s how we learn, it’s how we grow, it’s how we move from falsehood to authenticity. Ronna Russell is a wonderful example of that.