I’ll never forget the day I found my apartment.  I had been desperately searching for a place to live.  Since I wanted the divorce, it was up to me to move out.  We had been living in the old house together for months and were to the breaking point.  It was time to find the money and find a place.  The only three bedroom apartment I could afford on our side of town was dark and gloomy.  I put in an application and was accepted, which was a miracle in itself.  I asked the girls if they wanted a dark three bedroom apartment or a nicer two bedroom. They said they would share to live in a nicer place.

I was driving down State Street, feeling as desperate as I’ve ever felt in my life.  I saw a For Rent sign on a shitty building by Boulevard Park, right by the water.  I took a look.  It smelled like old hotel.  There was a view, but, oh god, a million years of cigarette smoke permeated the very bones of the place.  As I was pulling away, application in the passenger’s seat, I noticed another For Rent sign two buildings down.  It was a modest place, to be sure, but not slummy like the first.  Somehow, in 17 years of living in Bellingham, I had never once noticed it.

The owner led me down a long hallway (nice carpet, great paint, no smells) out into a spacious living/dining room that overlooked Bellingham Bay in the crystal sunlight.  I could practically hear choirs of angels singing.  I signed papers on the spot.  My deposit check bounced in my brand new single mom account, but I was in.

I didn’t have a bed, just our old couch that had become remarkably uncomfortable over the years.  The first night my daughter laid on the couch with her head in my lap and cried, missing her siblings, who had stayed in the old house.

I found a navy blue leather loveseat and armchair on Craigslist.  The picture was blurry but I had a feeling about it and went to see.  It was gorgeous and cheap.  The woman selling it was getting divorced.  Said it had sat in their master bedroom unused for years (just like me).  I said, “Well, I’m getting divorced, too and need furniture.”  We laughed.  Divorce musical chairs.  I also found a like-new mattress set on Craigslist.  The seller was nice enough to tie it to the top of my minivan and I drove it home on the Interstate in the rain, praying it would stay put.  Hauled it into the apartment by myself with minimal damage to it and me and finally had a bed.

On my way out of the old house, I had taken everything I couldn’t leave behind; the only things I had picked out over the years.  A few pictures, a wooden giraffe, a fish-print painting, a chandelier.  My desk and antique farm table.  It all fit perfectly into my new space.

The first Saturday in the apartment I slept in until 8:00.  I hadn’t had that much sleep in 20 years.  I was safe.

Over the next months, years now, I have spent as much time as I can carve out of any given day, sitting on my balcony.  Under starlight, blazing sun, misty mornings and surreal, fiery sunsets I have watched the sky and water.  I have watched the sunset move across the horizon with the seasons, watched snow fall on the water, geese skim the surface, loons dive, seagulls careen and stalk my deck for bits of barbecue.  Herons glide, seals bob and boats come and go.  I have watched the Coast Guard, helicopter training exercises, barges, sailboat races, fishing boats, kayaks, and canoes.  It’s never the same scene twice.

My kids, who have come and gone and come back again, have done the same.  Sometimes I come home to evidence of their hanging out.  Stray socks and glasses, hairbands.

It is impossible to describe the overwhelming sense of peace that comes from sitting by the water.  I once described it to someone as, if ever I have felt the hand of god in my life, it was the day I found this place.  As I described sitting on my deck, he said it was as if god told me, “I will meet you right here.”  And he has.  And I don’t even believe in god, but there it is.  This balcony by the water saved my soul, healed my heart and, sunset by sunset, pieced me back together.

I created a home, a place where I remembered who I am, surrounded by things, simple things, that I love.  This place is me.  That is why when my children live here or visit, it feels like home.  Not because they grew up in these walls or have childhood memories of it.  It is because it’s the place their mother became real.  They can come here and hide, bring their friends, talk to me all night, or be sick and sleep in my bed, eat all of my food, complain that there is no food.   And sit by the water and watch.

Changes come and I know they are coming again.  The day will come when I say good-bye to my spot by the water.  It is the only home I will have ever been sad to leave.  As a matter of fact, I’m holding back ugly cries just thinking about it.  But change is now made by choice instead of desperate circumstance and that is a very different kind of sad.  What comes next is a new adventure and love and the next big thing. 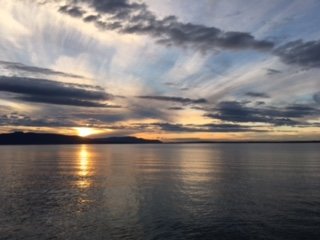