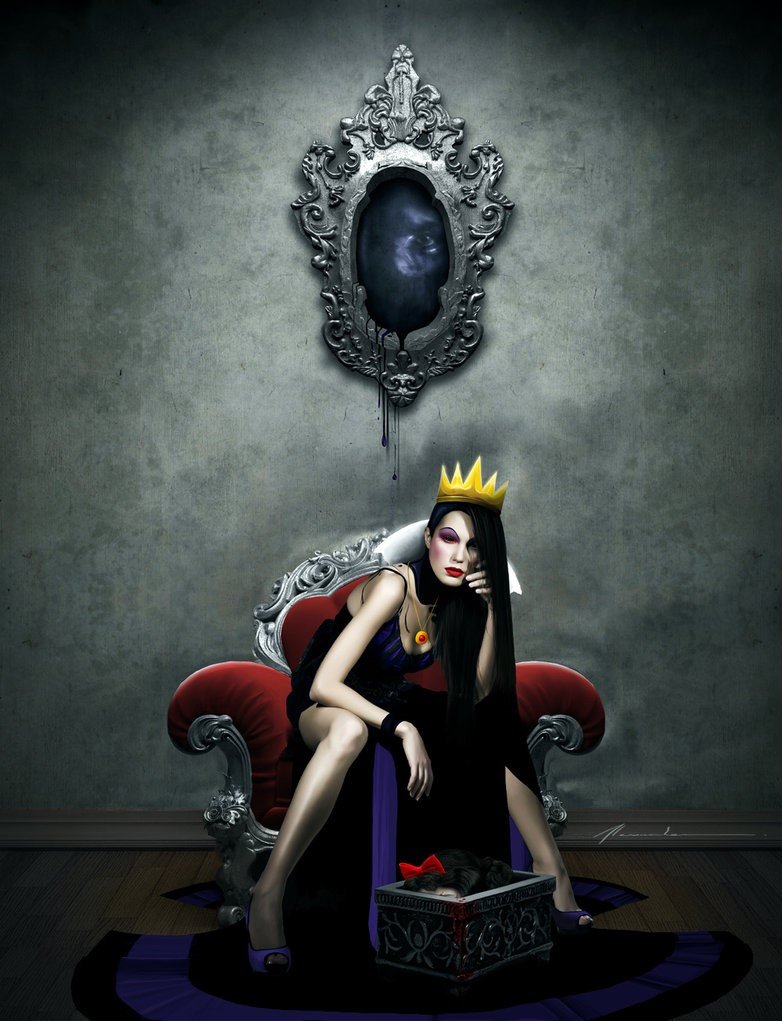 Women who grab power, or try, are generally reviled or at least held in suspicion (see the day’s news for examples). Mistrusted. This was true throughout our long history, when stepmothers were always evil and maidens always powerless and pure. When independent or sexual women were accused of witchcraft and burned at the stake-that’s not some cute historical narrative-those women were murdered. Funny how the Brothers Grimm were writing their misogynistic tales full of violence toward women about the same time. And all the women and girls watching learned a powerful lesson. Namely, it’s safer to hide under the protection of a man, shut up and keep your head and skirts down. Ever wonder how those themes play out in society today?

Much serious scholarly research has already been done on this subject, but I have written an unserious poem about Snow White’s stepmother for an assignment in my creative writing class. (See also Forbidden Fruit) I know it’s not a serious poem because my professor told me it isn’t. Maybe that is why it was fun to write.

Her loving arms a memory now

An intruder’s face emerges in the

Mirror, Mirror on the wall

Who is the fairest of us all?

No longer you, faded queen

The Virgin waits with her little men

of youth and beauty

waits to quench the thirst of the prince.

She is the only draught worthy of rescue

Resignation to fate her only

Else she will fall

To the dark magic of assertion

The witchcraft of power

The banishment of desire

Boil her lungs and

Use plenty of salt

Set a place for one

bloody in the middle

Still the young one

Why is it only Witches

demand a place at the table?

And where is her father now?

He rides away with

a nudge and a wink

and his men and his horses

pockets full of money and deeds

And so I ask you

Do we write our stories or do the tales tell us?

P.S. My memoir, The Uncomfortable Confessions Of a Preacher’s Kid, releases on April 4th! It is available for pre-order on Amazon now.