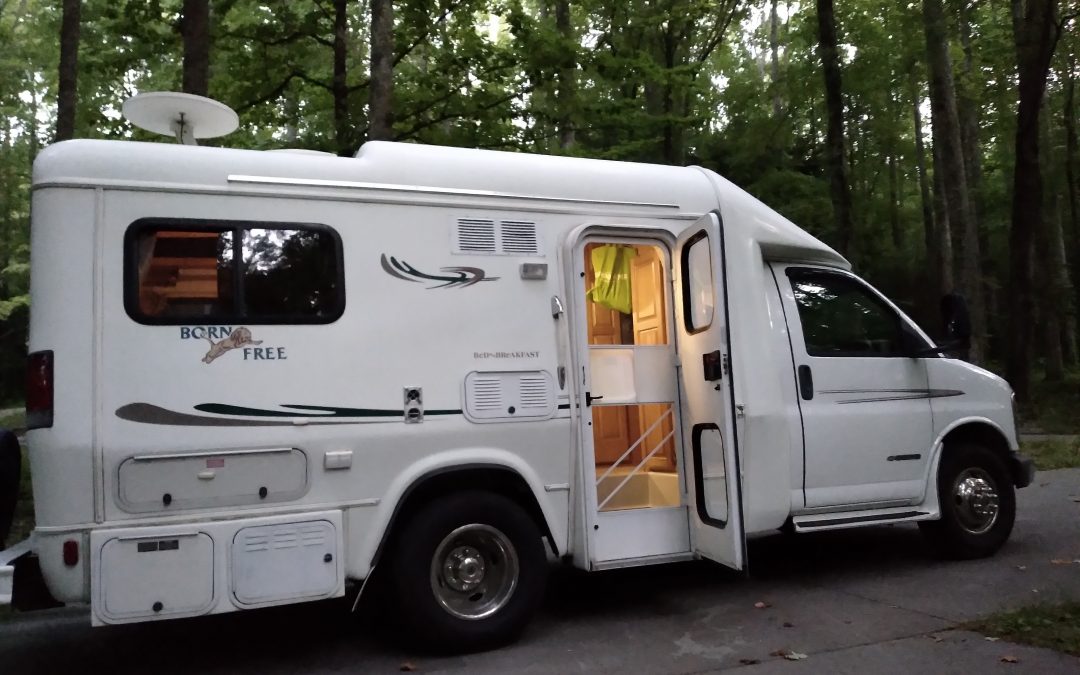 It turns out when you arrive at a campground after dark after having driven for eleven hours with two dogs and a refrigerator you found out doesn’t work the night before you leave for a two week trip, there is more than one way to start a campfire after you discover that you forgot all the fire starting thingies.

Only certified, labeled, heat-treated firewood was allowed inside the national forest, because of bad hitchhiking bugs, and please scrounge for kindling because it’s everywhere as you are in a forest, the website said. So we stopped at a roadside market just outside the campground for wood that was neither labeled nor certified. While my husband was inside paying way too much for the wrong wood, I sat in the parking lot beside a pick-up truck with a confederate flag in the rear window and a person with urgent dental needs sprawled in the pick-up bed. The driver slumped behind the wheel until a woman delivered a round of beers. As Steve piled three sacks of unlabeled firewood onto the RV step, the driver peered over at our new-to-us RV, about which we know very little.

“Chew gotta THREEEEFIDDDYYYYY or a FOOOOFIDDDDYYYFOOOO?” the driver blurred slowly, a glint of smile behind his slurry eyes, detecting our undisguised cluelessness.

“That’s a good question!” Steve sidestepped as they grinned and backed out.

‘Naaaccce dawgs,” the guy in the back smiled sweetly and waved.

“Thanks,” I smiled back, hanging onto their collars because I don’t know what confederate flag wielding drunk people mean or do not mean. Yes, I know the stereotyping jitters are my own.

We got set up at the campsite and began to scrounge for kindling, as instructed on Recreation.gov, because we are making a fire and cooking dinner on it, damn it. We are. Unfortunately, the forest is pre-scrounged, so our inadequate handful of damp twigs fizzle before our possibly illegal firewood could catch.

“No, dammit. You could go ask them for help,” I suggested, gesturing to the folks huddled around their roaring blaze one campsite over.

“No dammit, I am not doing that,” Steve snapped.

”Fine. I’m taking over the fire. We needed more kindling, a lot more,” I said, marching off toward the nearest trees.

We re-scrounged the surrounding areas, venturing out a little further, and came upon a pair of men’s blue bikini briefs laying in the weeds. Thirty years ago or so, my then-husband and I stopped at a rest area somewhere between Sacramento and Portland, and in the men’s room was a pair of blue bikini briefs that some poor soul was wearing when they almost but not quite made it to the toilet. This unfortunate blue bikini brief wearer had dropped his mighty full drawers, stepped out of them, and walked away. Apparently. From that day forward, the words blue bikini briefs was enough to give me heebie-jeebies and helpless giggles.

We ended up with a decent stack of kindling in the fire pit. I pulled out my drawing pad (no I cannot draw, not even while camping) and ripped out the perforated pages, twisting them into spikes, which I inserted in between the twigs and firewood. Drawing paper is good stuff and highly flammable, but it burned out too quickly to catch the kindling. If only we had something to make the flames last a little longer and burn a little hotter. I glanced at the glass of rosé in my hand.

Hell no, not the wine.

And then I remembered that at the last minute before leaving home, I swept all of our random first aid supplies into my bag, including a bottle of rubbing alcohol. One quick rummage later and I squirted a shot of isopropyl onto the sizzling twigs and they burst into flame. Every time the flames dwindled, I give them another shot of antiseptic encouragement. Within minutes, the firewood caught and we had a real campfire. Using a stick, I carefully lifted the blue bikini briefs, which appeared to be clean, just abandoned, from the weeds and placed them carefully in the flames.

I felt like a hero until the next morning when I discovered we neglected to pack coffee mugs. As it turns out, wine glasses hold hot liquids just fine.